The NBCA AGM and annual conference which was held in Launceston in June proved to be a busy time for the Councillors and the NBCA Executive.

The conference received a detailed report from the hosting committee of the Gawler 2016 Championships and the Council extended warm congratulations on the successful staging of an excellent event. The support of Trinity College, the District Council and people of the district was an essential contribution in making the event such a success.

A detailed report was presented on the preparations for the 2017 Championships to be held in Launceston. This promises to be an event with considerable attractions for the banding community in such a picturesque and historical city. The planning by the organizing committee indicates bands experience superb venues for their performances and excellent prospective adjudicators.

Executive Officer Change for the Council 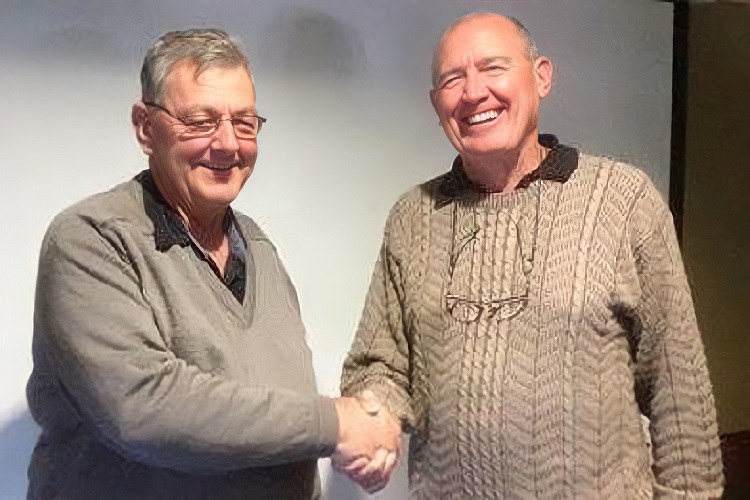 Allen Woodham OAM, at left handed the duty of Executive Officer to Tony Schraven at the recent NBCA conference in Launceston. Allen, who has completed 10 years in the position, decided it was time for a change with a new face to drive the Council forward. “I have been extremely privileged to have served Australia’s band world in the position and am confident Tony will be an exceptional replacement to take the Council into the future,” Allen commented.

The State Councillors made a presentation to Allen after the election of the new officer and wished him every success for the future which was suitably endorsed by everyone present.

The National Band Council of Australia advises that nominations from interested persons are now being received for the position of Executive Officer of the Council as outlined in the NBCA's constitution. Interested persons seeking to contribute to Australia's band world are encouraged to submit a nomination for this position.

Nominations and all inquiries should be directed to the current Executive Officer and all nominations MUST be received by the close of business on Friday, 3rd June 2016. Nominations received after this date will be declared ineligible in accordance with Section 14 of the NBCA constitution. All nominations will be considered by the Council at its AGM as part of the annual conference to be held in Launceston from Friday, 17th June to Sunday, 19th June.

Nominations should comply with the NBCA's constitution and nominee(s) should acquaint themselves with Section 14 and Section 17 which details the nomination requirements and duties of the position. These guidelines can be referenced in the constitution which is available from the Downloads area of the NBCA web site.

The complete results for the 2016 Yamaha Australian National Band Championships have now been posted in the Archives area for reference.

The 2016 National event proved to be everything that was expected and more with the excellent venues at the Trinity College Gawler. The Parade of Bands through the main shopping area drew a good crowd and motivated many spectators to then attend the inside events over the remainder of the weekend.

Many band people will have great memories of the Gawler contest with comments reflecting the appreciation for the hard work undertaken by the organizing committee, who produced the event, and the scores of volunteers who worked in various roles to make it all happen. The consistency of this annual event is always maintained by the hard work and dedication of the scores of people who volunteer their time to make it happen. Well done to these wonderful people.